Reduce Your Stress & Anxiety With Ashwagandha

We all experience stress from time to time. Whether you're feeling a bit frazzled, or suffering form anxiety, adding Ashwagandha to your diet can make a world of difference! To understand the power of ashwagandha you first have to understand the power of adaptogens. Adaptogens have been used for centuries in both Indian Ayurveda and Chinese medicine. Today, they’re often recommended by naturopaths and holistic doctors to help patients better adapt to stress. Think of adaptogens as power-ups in a video game – they give you strength and endurance to keep going!

By regulating our stress response, adaptogens can help:

Pretty powerful stuff, huh? According to multiple studies, adaptogens possess therapeutic effects and may promote general well-being. And, depending on the type of adaptogen, they’ve also been shown to boost cognitive function, lower anxiety, improve moods, and increase endurance.

Ashwagandha has become one of the most-loved adaptogens due to its versatility and impressive health benefits. Here are a few reasons you need to add ashwagandha to your diet.

In the United States, 70% of adults report feeling stress or anxiety daily, which can lead to storing fat in the abdomen. But studies have shown ashwagandha can reduce cortisol levels, with one study reducing cortisol levels by nearly one-third!

And, according to a 2013 Medical Expenditure Panel Survey, more than 1 in 6 Americans take a psychiatric drug. One 6-week study showed participants who took ashwagandha root extract reduced their anxiety by 88%.

#2 - Can Help with Thyroid Function

Ashwagandha has been used in Ayurveda to improve thyroid function and researchers decided to put it to the test by giving participants 600mg of ashwagandha root extract over an 8-week period.

Research showed ashwagandha increased thyroid function, which means it may not be suitable for those with a hyperactive thyroid. 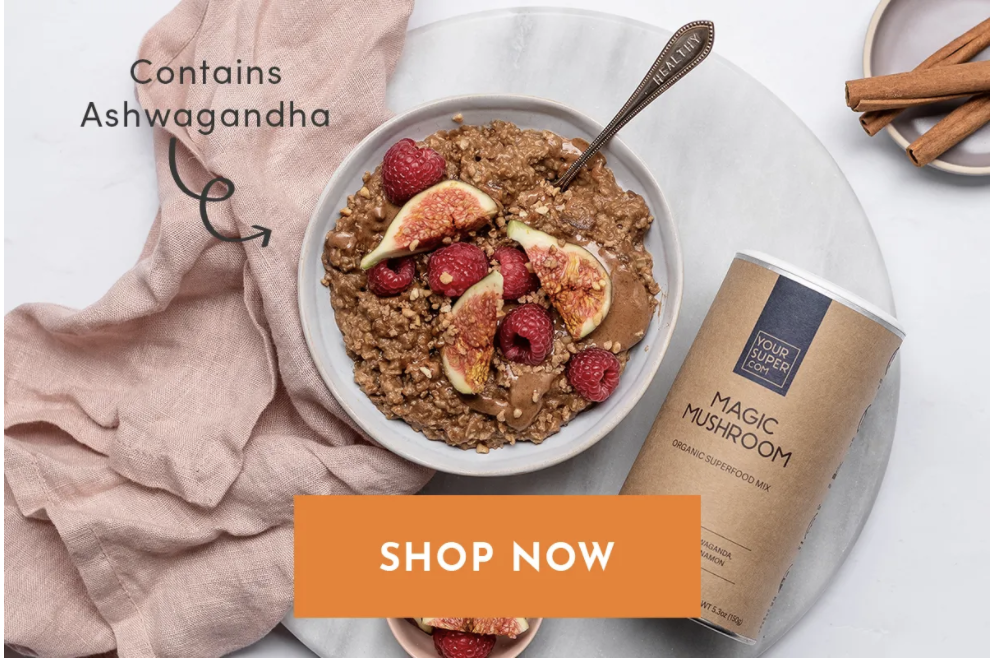 Ashwagandha has been recommended to support better sleep for centuries. The leaves of the ashwagandha plant contain the active compound triethylene glycol, which promotes sleep.

Ashwagandha is a natural stress remedy, and may improve adrenal function.

There are two reasons why ashwagandha means “smell of the horse” in Sanskrit: 1) its unique smell and 2) it makes you strong like a horse!

Researchshows that ashwagandha can increase muscle mass and size — especially in men. Another benefit? The same study showed that it can reduce body fat as well!

How to Add Ashwagandha to Your Diet

Ashwagandha is often taken as a swallowable tablet or capsule. We use organic ashwagandha sourced from India in powdered form in our Magic Mushroom Mix. It’s just one of few other superfoods found in these popular mixes, which can help reduce stress. Try adding them to plant-based milk, oatmeal, smoothies, and even desserts!

Improve Your Health With Ashwagandha

Superfoods are nature’s medicine and ashwagandha is just one of the many powerful plants that can help you improve your health.

While it’s true that no one food is a medical cure-all, multiple scientific studies have shown that certain foods provide greater health benefits than others. Learn more about our ingredients and how they’ve earned themselves the title of “superfood.”